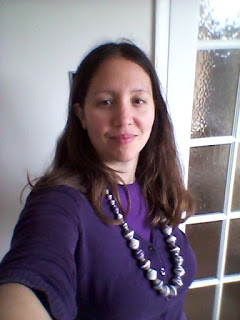 How not to upcycle a necklace!

The necklace in the picture was left at my house during a clothes swap party (read more here). The beads are made out of old magazines and I really like it. I don’t think it really suits me though as it is too long for me and I have only worn it once or twice since I got it.

I decided that it would be a great idea to turn it into a necklace and a bracelet and thought it would be as simple as chopping it up in the right places and then tying the ends.

The chopping part went really smoothly although a few beads fell of the ends as you can see pictured below. 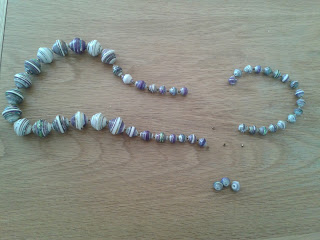 The tying it back together part went far less smoothly. The plastic twine the necklace was on did not want to be tied and the beads kept falling off and it was very frustrating to say the least.
I decided to give up and use thread instead, which would tie better. I put some thread on a needle and threaded it through the beads. After doing that I realised that was no good either. The problem was the size necklace I wanted was too small to get over my head. What I actually need is some stretchy string or a clasp and I have neither of those to hand so for the moment the beads are all sitting in a glass jar awaiting the right materials! 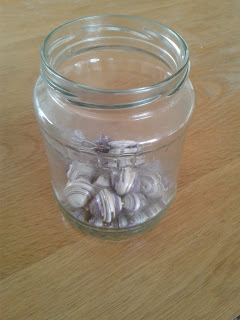 Sometimes I find I ruin things in an attempt to upcycle them and think I should have just given whatever it was to a charity shop in the first place! On the other hand it is a learning experience and I now know how not to upcycle a necklace!
Have you ever tried to upcycle something that didn’t quite go to plan?
If you liked this post please click like on Facebook and follow on Twitter – thanks so much!
Tagged: ecofailFrugalGreensustainablethriftyupcyclingzero waste