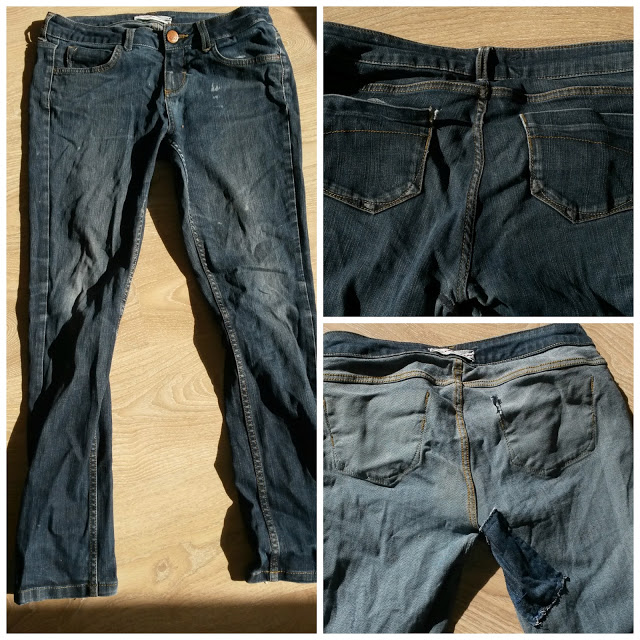 I could buy new jeans, but I prefer my DIY haute couture ripped stained ones!

I bought a pair of jeans at a car
boot sale last summer for £1. It had a few paint stains on it but I didn’t let it bother me. They were small and near the top of the jeans, so are easily covered up by a top or a jacket. I’ve worn them almost every day since, unless they are in the wash and then I reluctantly wear something else.

They started to wear out around
the inner thigh areas and inevitably one day I noticed there was a rip. I zigzag stitched over the rip and then put a patch underneath it
using denim from a pair of my kids worn out jeans (I have a stack of them that I save for sewing/ crafting projects).
I carried on with my life, but
then the pocket got caught on something and a bit of it came loose, leaving a
hole behind it. I’m going to patch that up too at the next opportunity and in the meantime I’m wearing skirts and jeans that usually don’t see the light of day.

I could go and buy some more jeans, but it’s much more fun to see how long I can make these ones last and I’m sticking with a challenge to buy no new clothes for a year (you can join the Facebook group here)! Plus ripped paint splattered jeans are very fashionable don’t you know –  Ralph Lauren currently has a pair for the bargain price of £200 (don’t believe me – take a look here)!

I didn’t have a clue why shabby looking jeans are so in fashion until I read Orsola De Castro’s blog on the Fashion Revolution site (read more here) and I finally understood what boyfriend jeans were all about. They are meant to be your boyfriends jeans and your boyfriend is supposed to have got up to all kinds of strange activities to have worn the jeans as described hilariously in Orsola’s post :). Orsola points out that these jeans symbolise a pretense of living a real life – one where we get messy and dirty and rip our jeans, which is pretty sad really. I think that people do mess up their jeans though, but just not necessarily in regulation ways i.e. not exactly like the ones on sale.

I think the current fashion is totally ridiculous. Not ridiculous because I don’t think it looks good (although I would prefer not to have great big gaping holes in my jeans partly because it would be a bit chilly and partly because they would be easy to damage further and would last less long) or ridiculous because it means if you make a mess of your jeans you can carry on wearing them without embarrassment. I think it is ridiculous because people are paying good money for someone else to ruin their jeans for them, or not enough money (if they buy them at a crazily low price in somewhere like Primark). Also whether you pay over or under the odds for these jeans there is no guarantee that any great care is paid to the environment or the workers in the production processes. I prefer to buy my jeans secondhand in good(ish) condition and ruin and mend them myself thank you very much – it’s so much more personal, bespoke and original. It also has the added benefits that it is a lot less expensive and better for the environment.

So what are you waiting for – get yourself a pair of secondhand jeans in decent condition and wait to see how they evolve into your very own bespoke haute couture ruined and repaired jeans that tell your personal story rather than a story that has been imposed upon you!

Also while you are at it join in with Fashion Revolution Week which started on Monday. It is a campaign which was started after the Rana Plaza disaster in Bangladesh with the aim of convincing the fashion industry to take better care of the workers in it. The idea behind the week is that you take a picture of the label of an item of clothing you are wearing and get in touch with the brand on social media asking them who made your clothes. It’s a great campaign which deserves all the support it can get!