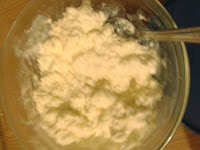 You might think ricotta and cottage cheese are two different things, but in this very simple homemade version of them one can lead to the other! I found this recipe for ricotta and this one for cottage cheese.  Basically they follow pretty much the same process except that if you want to turn the ricotta into cottage cheese you pour what the American’s call half and half over it (a 50:50 mix of cream and whole milk).

Ingredients:   To make ricotta you need:

To turn the ricotta into cottage cheese you also need:

Method:   The process is really easy.  Basically heat some milk in a pan gently for a few minutes until it is warm to the touch, then stir in some vinegar until the milk curdles and separates out like in the picture below.  The recipes I have linked to above specify the temperature the milk should get to and the quantities to use, but I just used the milk I had, guessed when the milk was ready and guessed the amount of vinegar – it turned out ok! (Although I think I used a little too much vinegar- note to self for next time).

If it doesn’t look like this after you have stirred and left it for a little while, then add a little more vinegar.  The first time I made it, I used lemon juice instead of vinegar, but it had quite a strong taste and the vinegar is less noticeable, but you may want to experiment and see what you like best.   Once it has rested for a while (as suggested in the recipes linked to), drain the mixture through some cheesecloth (apparently you can save the whey for use in baking – this is not something I have tried yet though….).  Wash the curds to ensure they are free of whey and make sure they are fully drained.  At this point mix in some salt to taste and then you have ricotta.   To take it to the next level put it in a bowl, smother it in half and half (a 50:50 mix of cream and whole milk) and then you have cottage cheese!   So easy, so simple, such a great way to use up some excess milk about to go out of date (although it is probably preferable to make it when the milk is fresher, but I had some milk that would have gone to waste otherwise and thought why not!)   If you liked this post please click like on Facebook and follow on Twitter – thanks so much!