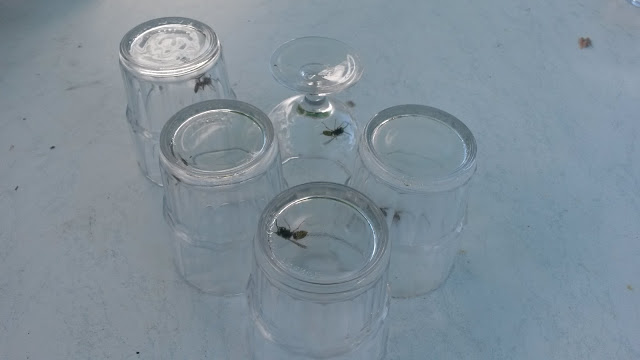 Wasps are not the most popular buzzy creatures out there. They have a pretty terrible reputation for ruining alfresco summer meals and some are killing honey bees, but wasps are not always annoying and they are not all villains. In fact they are actually really beneficial in gardens.

If you garden, wasps are among your best friends. The common wasp is a top predator — capturing more than 4 million prey-loads, weighing 7.2lb per acre, every season. Their favourite prey is aphids, rose-killers and tormentors of every gardener’s favourite plants. (Taken from  Why all civilised people should love wasps)

That’s all well and good isn’t it, but you still don’t want them buzzing around your food while you are trying to eat it. There are lots of ways to deal with this problem, some better or worse for the wasp and the environment. This method tries to minimise the impact on both and won’t cost you a penny. Essentially all you need to do is trap the wasps that come along while you are eating in an upturned glass and then carefully release them when you are done. It makes it easier if you put a bit of bait on the table or picnic rug for them to land on and if you are feeling kind you could even leave it in there with them. To minimise harm to the wasps make sure they are not left in direct sunlight and they are released as soon as you have finished eating,
We did this last summer and instead of feeling annoyed by the wasps or retreating inside, wasp catching, observing and then releasing became a fun activity that my kids got pretty good at!
Tagged: wildlife