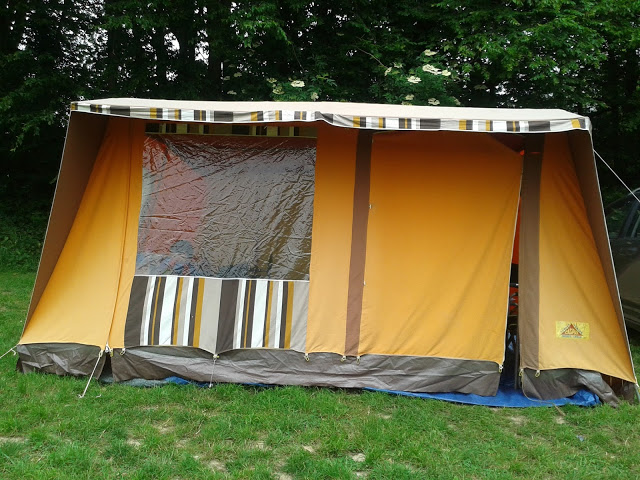 Introducing Caspar the friendly tent and how to get camping equipment for free!

We got this beautiful French 70’s tent from Freecycle (labelled Tentes Caspar) a while ago and had a lovely time camping in it over the weekend with a big group of families from my kids’s school.  We had a rather more modern tent which we used last year camping but it was very cosy with four of us in it (meaning we were all squashed) and so I kept a close eye on the Freecycle and Freegle emails and got in there quickly when I saw an offer of a large tent come up.  It is the heaviest tent in the whole world (ok maybe not the whole world, but it is pretty heavy!), came with no instructions and we really weren’t convinced that a mainly canvas tent would be water proof or that we even had all the bits!   We did a test run in our garden a week before we went and were quite relieved that all the important bits were there and actually it was pretty roomy! It has 3 bedrooms – a big one in the middle and two smaller ones each side and an indoor porch area which was big enough to fit a wallpaper pasting table at one end and to stand up in!

We did find a hole in one of the bedroom floors which we patched up with duct tape and one of the zips needs replacing on the front porch.  Plus it took quite a long time to put up (a couple of hours) compared to some of the modern tents which go up really quickly, but we weren’t in a rush and it went down much quicker (and apparently some of the pop up tents can be really hard to pack away afterwards)!   I honestly have no idea how much we would have had to pay for something similar as they don’t really sell them like that these days, but new large canvas tents can run into £100’s. In fact we could have easily spent a small fortune on camping equipment if we were buying everything new.

Alongside our free tent however, we borrowed a roof box, used equipment like sleeping bags and a trangia (a small cooking stove) we have had for around 20 years at least. We took a folding wallpapering table which we covered with some spiderman table cloths that I had saved from the bin at a kids party and some folding chairs which my parents had given us that they no longer wanted!

We hardly bought anything new for the trip, except that my husband couldn’t resist getting a couple of new torches and some walkie talkies for the kids. I was pretty anti the walkie talkies, but actually they came in really handy. It was a great way to check in to make sure the kids were ok and to let them know when it was lunch time but still let them have their freedom with their friends. We also brought all the food with us and tried to go zero waste (ish).

So the reason I’m writing this blog post is to say that if you want to go camping this summer, don’t want to break the bank but do want equipment with eco credentials, then borrow it or get it for free from somewhere like Freecycle or Freegle.

Reusing unwanted things already in existence and diverting them from landfill is always going to be the most eco-friendly option compared to buying something new and if it is free then all the better! Plus if the stuff you get is a bit different then you will be inadvertently fitting in with the latest camping trends.

I don’t know what it is like in your area, but near Brighton there are various glamping sites (glamorous camping) filled with weird and wonderful things to camp in. One site near me offers nights in a helicopter or a bus, another site has yurts, shepherd huts and a gypsy wagon!

To be successful at finding things for free, I recommend signing up to the Freecycle and Freegle emails. Read them through as soon as they come in and reply to offers of things you want straight away. I find it really helps to tell people how much you would appreciate what they are giving away and that you will be able to pick it up as soon as possible/ at a time that is convenient to them.  Some people just want to get rid of things fast and if you can get there quickly, you stand a better chance of being given whatever it is.

Another tip is to start looking for whatever it is you want early. The more time you give yourself to find something the more likely you will find it, plus if it needs fixing up then you have time for that as well.  People have told me that they find the emails annoying after a while, but I just delete them without reading them when I’m not looking for anything in particular and only read them when I actually want or need something and that works well for me.

If you can’t find what you need being given away then don’t be afraid to ask around if anyone can lend you stuff. Can you imagine how much camping equipment is sitting around unused in people’s lofts, sheds and garages for most of the year? It is very possible that you know someone with camping equipment who could in theory lend it to you. People can always say no and if you feel worried about borrowing things from other people then give them a bottle of wine or something to say thanks or offer to lend them things/ help them out when they need help. I didn’t even ask to borrow a tent before the camping trip we went on, but chatting about the trip before we went I told a few people I really wasn’t sure if our free tent would work and three people very kindly offered to lend me theirs!   I’m not going to lie though, borrowing can have it’s complications as people like things to be fair and managing that can sometimes be tricky, but if you are only going to go camping once a year and especially if this year is your first time (and you are not sure if you are going to like it), borrowing means you can try it out without spending lots of money and that you don’t have to find somewhere to store all that equipment when you are not using it.  Although if you do decide to invest in stuff (or find it for free), you could lend it out to your friends and family when you aren’t using it.   One last idea for getting your camping equipment for free – ask around at festivals if anyone wants to give away theirs afterwards (if you don’t plan on going to a festival, you could ask friends that you know are to look for you). Shockingly (to me anyway), there is a real problem with people who can’t be bothered to take their tents home with them because they find them too tricky to pack away! There is an organisation trying to get people to stop doing this called Love Your Tent – read more about it here.     So if you are thinking of going camping this summer but are put off by exorbitant prices for equipment and are worried about their eco credentials, stop, don’t shop – give the other options a go!