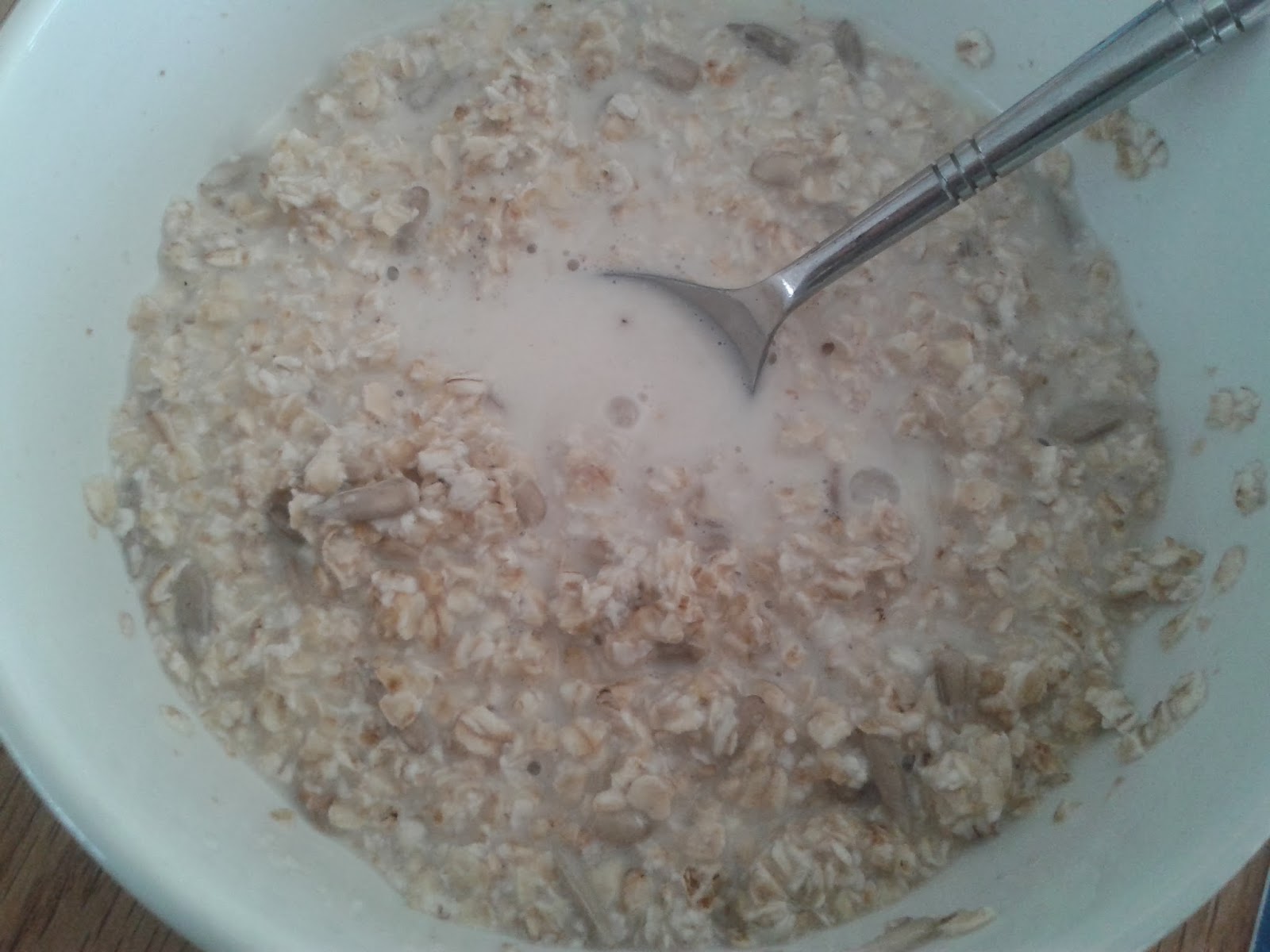 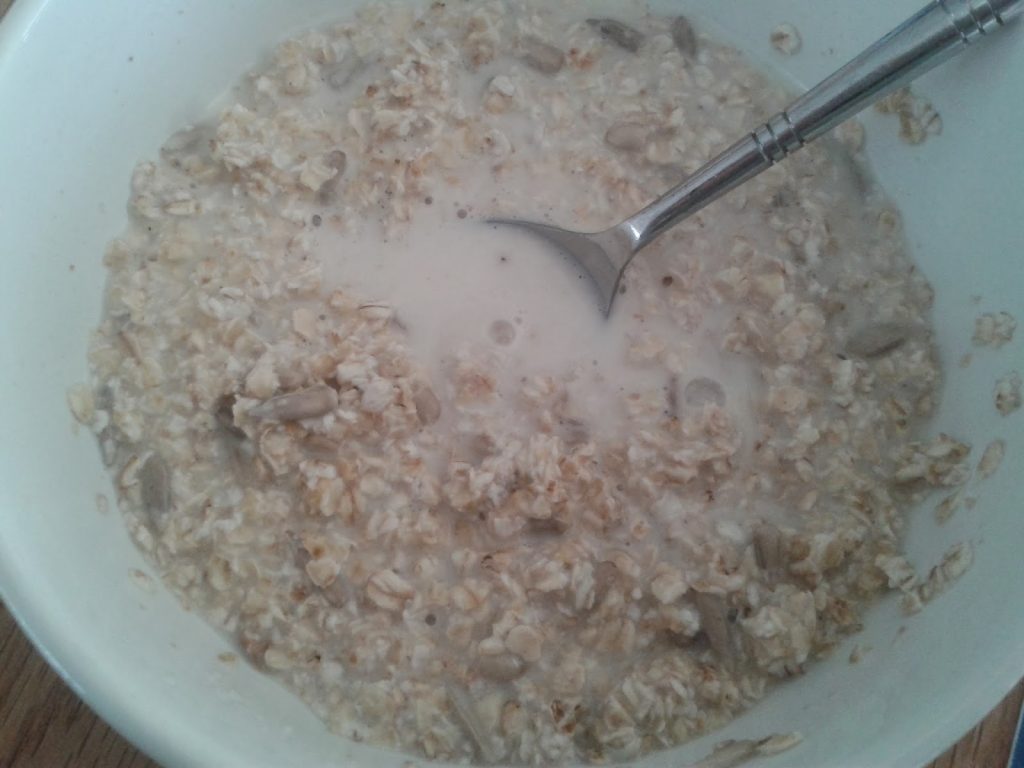 I think this is the last in a series of posts about being sugar free (unless anyone has any questions for me…). To summarise again – in the first post I wrote about all the unexpected places sugar is hidden in food e.g. crisps and stock cubes (read more here). In the second post I listed 10 reasons why I have quit sugar – did you know some claim it can make you look older (read more here)? Then I wrote about how some simple techniques helped me overcome my addiction to sugar (read more here).  This blog post is about what I actually eat, instead of the sugar filled foodstuffs.
For breakfast I eat:
In the summer I have soaked rolled oats (I use water, my kids have milk) with cinnamon, ginger and sunflower seeds sprinkled on them.  Sometimes I flavour them with lemon balm from my garden instead and I have some other ideas for flavouring oats here. My kids also have chopped up banana or pear in their soaked oats. Some people soak them overnight (I think the non-rolled oats would need longer soaking), but I find it is fine to ‘soak’ my rolled oats in the morning (i.e. pour on water or milk, mix and eat).  In the winter I cook the oats and make porridge.
Other sugar free breakfast options include:
For lunch I eat:
In the summer I have salads, in the winter I have soup.  Both home made and home grown where possible… Instead of adding stock cubes to soup I add homegrown herbs (where possible) like sage, thyme, oregano, lemon balm, rosemary and bay leaves.  I also sometimes add freshly ground sea or rock salt, pepper and sometimes yeast extract (which is a key ingredient in stock cubes). I don’t usually add any salad dressing to my salads, although I might drizzle over apple cider vinegar and cold pressed extra virgin olive oil occasionally…
On the weekends when I am out and about with kids I often make myself rice cake ‘sandwiches’. I have fillings like cheese and cucumber, homemade houmous (click here for houmous recipe), peanut butter, cream cheese…(if you want to avoid the plastic tub that comes with the cream cheese, I have a spreadable yoghurt cheese recipe here) I just use rice cakes in place of bread.  We always take chopped up fruit and veg with us too e.g. slices of apple, carrot sticks, cucumber sticks and satsumas…  I do need to find an alternative to rice cakes though as I don’t like the packaging they come in…

I sometimes make rye waffles (click here for recipe) which I have with houmous or peanut butter.

For snacks I eat:
Apples, satsumas, pears which aren’t too ripe, walnuts, brazil nuts, cashew nuts, sunflower seeds, pumpkin seeds, carrots, cucumber, celery. peppers (plus other fruit and veg as available – in the summer we have lots of berries, mange tout, sugar snaps and tomatoes which we grow in the garden).

Plus I eat rice cakes (other sugar free crackers could work as well) with peanut butter, coconut oil, houmous, cheese and so on.

For the kids usually mid morning I make up a plate of sliced up fruit, veg sticks, slices of cheddar cheese and a rice cake with yeast extract or peanut butter on it and sometimes I join in.

The other day I had a go at making savoury flapjacks, which I like the idea of, but my recipe needs some work…

For dinner I eat:

To start with I ate wholegrains of all sorts, but after a while gave up wheat (I did this because I thought it might also not be agreeing with me and wanted to see if it made a difference – not sure about that yet…)

I tend to make a lot of meals up as I go along, but this is an example of the types of things I might have for dinner:

Desserts:
Most evenings I tend to have chopped apples, sprinkled with sunflower seeds and cinnamon plus I used to add ground almonds but I ran out of them.
Other dessert ideas include:
My general rules:
I know I should probably avoid eating after 18.00, but I never do and also another thing I keep meaning to try is avoiding the carbs in the evening, having veg as as side with dinner instead…  I did the Hay Diet for a while and although I don’t agree that proteins and carbs should be eaten separately, I think that having veg as the main side at dinner time and cutting down the proportion of carbs is a good idea.
If you are thinking of going sugar free and none of the food I eat appeals to you, then it might be worth a look at Erica White’s Beat Candida Cookbook, which has over 250 sugar free recipes…

I hope this mini series on why and how I quit sugar was helpful – if anyone has any questions please let me know!