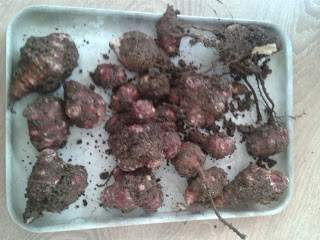 Jerusalem artichokes actually originate from North America and I think they taste a little like Chinese water chestnuts, especially if you slice them up and stir fry them.
Several months ago we went to a seedling swap in Preston Park in Brighton (organised by Harvest, BHOGG and Brighton and Hove Food Partnership).  We took some of our spare seedlings with and came home with a variety of things including 3 Jerusalem artichoke tubers.
My husband planted them in the garden and two of them grew and grew and grew!  They got really tall – around 6ft high. Eventually though they wilted and died and today was the day that my husband decided to dig them up. From our original 3 tubers (one of which died soon after we got it), we got around 20 tubers, plus a couple that have been left in the ground as well. The hope is they will grow again next year…
We are going to be eating a lot of Jerusalem artichokes in the near future and I’m going to try and feed them to the rest of the family and our student, but I’m not sure how successful that will be..
I googled the best way to store them and this article says you should leave the mud on them and either put them in a paper bag in a cool cupboard or in the fridge in the veg drawer.  I’ve put them in the fridge for now so I had better use them up quickly.  I know they taste good in a stir fry, but I haven’t done much else with them – does anyone have any recipe suggestions?
If you liked this post please click like on Facebook and follow on Twitter – thanks so much!
Tagged: grow your own