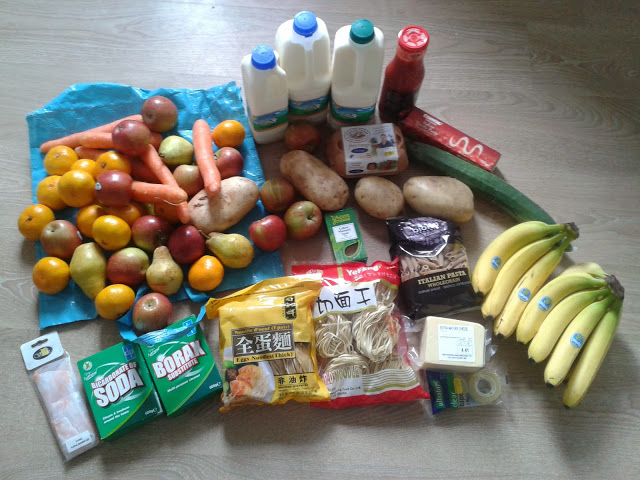 Yesterdays shopping and a trip to the supermarket!!!

Don’t worry I didn’t buy my food in the supermarket.  It was more outside the supermarket where I spent the money.  I went and filled up with petrol. Seeing as there is no especially ethical way to buy petrol in this country I’m allowing myself that exception.  I’m guessing you are thinking that after all this time of writing my blog I should have ditched the car and you are probably right, but that is not a step I am ready for just yet…
Putting the car driving aside I did go to a local parade of shops to buy my groceries yesterday.  I discovered Southwick Square, which isn’t far from me.  It has a greengrocers and butchers right next door to each other. It also has a couple of charity shops, a shop that sells a variety of things from coffee to clothes airers and a large specialist Chinese shop, which sells all kinds of Chinese food including frozen peas – which was a real result as I was getting a bit worried about where I was going to fuel my families pea fetish from in future!
There is a bank and some other mainstream shops there as well.  Southwick Square really isn’t far from me and I never would have discovered it if I hadn’t started this project – so I am really pleased I did!  If you are thinking of checking it out, there is an Italian Food Market there on the 1st November which could be a good time to go and have a look!
I bought some food at the butchers last week and they said that the chickens and beef are free range but not organic (I didn’t ask about other meat).  Although I am finding the local vs organic debate tricky, I am pretty decided upon free range being the most important criteria when it comes to meat and poultry as I think it is cruel to keep chickens and other animals in cramped conditions. So if meat or poultry was local but not free range I wouldn’t buy it and as organic meat, poultry and eggs are often really expensive I tend to stick to free range these days.
At the grocers I asked them where their food came from and they said it was mostly local and sometimes organic.  Nothing was labelled as local or organic and some things obviously came from overseas such as oranges and bananas.  Other things did look local though such as muddy potatoes and cox apples. They also have a good range of dried goods, mostly organic including infinity foods products (another local company).
I was quite pleased that I managed to avoid plastic packaging on all of the fruit and veg apart from the cucumber.  When I was going round the shop I put them straight into my reusable carrier bag and then after they were weighed, they went back in.  I had a two bag system, which made it easier as the weighed goods could go into a different bag.  I have a little way to go still on going plastic free though as you can see by the packaged goods that I did buy…
There are so many options for local shopping in Brighton.  I do really like Southwick Square, but may also be having a look at some of the other places soon.
So far I have given up shampoo and supermarkets as part of My Year of Eco Challenges and now I’m preparing to give up plastic too. If you have a moment I would really appreciate it if you would consider sponsoring me with an action on my DoNation page. Also if you liked this post please click like on Facebook and follow on Twitter – thanks so much!
Tagged: shopping