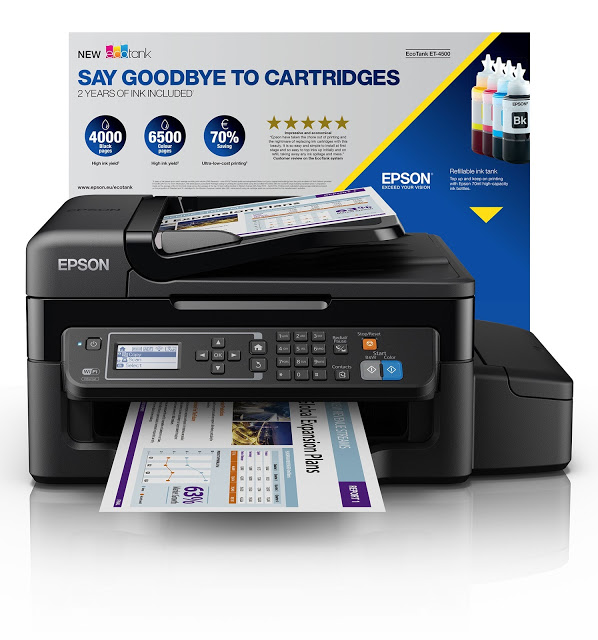 I was recently sent an Epson EcoTank ET-4500  printer to review. It is an all singing, all dancing faxing, photocopying, scanning and printing machine, which can connected to your home network with a cable or wirelessly! I was offered it for review as it has a tank for the ink instead of cartridges and the ink is meant to be sufficient to last 2 years.

As far as printers go it seems like a really good one so far. I have been doing a lot of decluttering recently and managed to free up a cupboard which has power in it and love the fact I can keep it in the cupboard and print to it through wifi! This printer is not zero waste as it came packaged in plastic and the ink to fill up the tank was provided in disposable plastic containers which were again wrapped in plastic. The benefit of these over other cartridges though are that less of them are needed and there is less ongoing waste with this printer. Also as the ink can be refilled, although it is an expensive initial outlay, it is likely to work out cheaper in the long run than using a printer which won’t allow cartridges to be refilled.

Putting the ink into the machine was quite simple. Working out how to get it to work with my computer was a little complicated but once we got it all set up it has been easy to use. I particularly like being able to scan things in like my kids artwork, so that I can then put the originals in the recycling or use it to wrap gifts without feeling too guilty :).  As much I would like to reduce my printing there are times when I need to print and it came in really useful for printing out pictures for one of my kids homework recently.

You can adjust how quickly the printer goes onto standby with the eco setting and it is worth changing it so that it isn’t on fully for too long (or even better turn it off when you aren’t using it). It isn’t going to cost big bucks either way though. We plugged it into a plug-in energy monitor and worked out that if it was left on all year (without printing) it would cost us around £6 a year in electricity costs and if it was on standby (again without printing) it would cost us only about £2 for the year!

There is a range of these printers to suit different needs, which you can find out more about on the Epson site.

UPDATE: I have found that I have struggled to keep the printer connected to my laptop via WIFI, I don’t know if this is something to do with my home network, laptop or the printer though.

Disclaimer: a printer was received for review and affiliate links have been used in this article, but the opinions were my own!