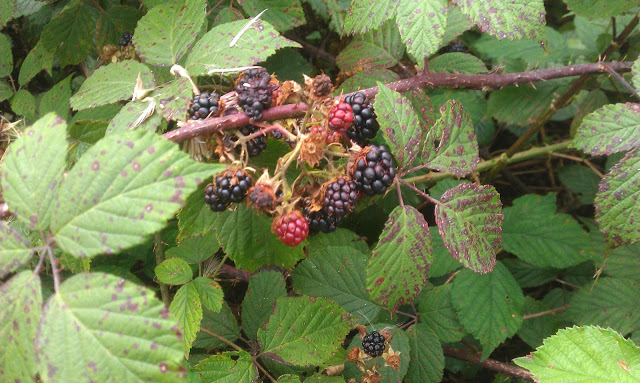 At the right time of year many bushes and hedges are brimming with blackberries.   You can buy them from the supermarket or even pay to pick your own, but it makes no sense when they are so abundant and easy to find.

We are very lucky to have a golf course at the top of road which has numerous blackberry bushes along a walkway which is accessible to the public. It is a great outing for our young family as we don’t have to go far and the kids love blackberry picking as well as eating them! A couple of months ago we went up there and filled two large punnets with blackberries.

I’ve never made jam before but faced with all these blackberries I decided that now was the time to give it a go. I found a recipe online which contained only ingredients I had to hand (i.e. it did not include pectin – a thickening agent often used for making jam). There was a helpful comment saying not to add the sugar straight away and bearing that in mind it worked perfectly.

The method that I followed: 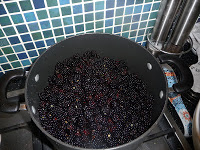 Step 1 – wash blackberries and add to saucepan along with the lemon juice and freshly ground salt. 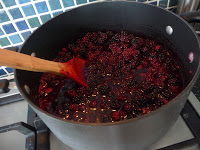 Step 2 – Bring the blackberry, lemon juice, salt mix to the boil and keep stirring for around 20 mins. 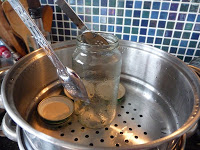 Step 3 – Sterilise your jars and make sure the utensils you will use on them and the jam are also sterilised.  I chose to steam sterilise my jars and lids in a tiered steamer saucepan.  I don’t have any canning jars and just reused some old babyfood jars. 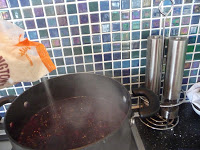 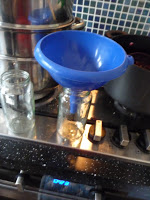 Step 5 – Carefully remove the jars from the steamer and put a funnel into the jars.     Next decant your jam into the jars 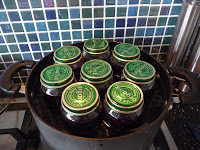 Step 6 – Fit the lids on tightly and ‘process’ the jars in boiling water for 10 mins.

Step 7 – Remove the jars carefully from the saucepan and leave them to cool.

Step 8 – refrigerate or freeze.  I do not have proper canning jars with fresh lids and a proper canning system for ‘processing’ the jars (i.e. ensuring the jars are entirely covered while being boiled and kept separate during the process) and so after cooling my jam needed to be kept in the fridge or the freezer.  Even if you do have all the proper equipment proceed with caution as not all recipes are safe for long term storage in jars in cupboards and I can provide no guarantees that this one is.

The only problem I had with this jam however is that I didn’t keep it all!  Thinking I had made too much I gave some away to friends.  I didn’t realise how popular it would be with the kids though and they have been adding it to their yoghurt for desert each day – next year I will make more!
If you liked this post I would really appreciate it if you click like on Facebook and follow on Twitter – thanks!