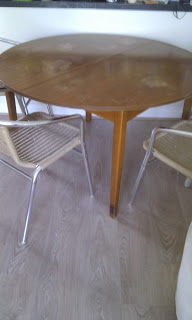 Are you plodding along making do with clothes rails instead of wardrobes, or waiting until you can afford it to buy a nice kitchen/ dining table.  Well don’t wait, just buy something second hand.

When we moved to our new house, we had room for a table in our kitchen which we hadn’t had previously.  We spent all our money moving and doing up the house and didn’t have anything left for a kitchen table, so we used our garden table instead.  We bought a nice tablecloth which hid the table, so you couldn’t really tell any different.  It was a bit annoying moving it in and out of the house when we wanted to eat outside, but we told ourselves it would do for now until we could afford something better.
A few weeks ago, when the weather was particularly nice, I decided we should try and find a kitchen table second hand in the meantime.  I had a quick look on Ebay, but I found I had to trawl through a lot of listings to find anything in my area (unless I was being particularly untechnically savvy).  I also had a look in the Friday Ad, but often there wasn’t a picture and the prices weren’t that cheap.  Other difficulties included finding transportation for the table and having to go to someones house to decide if it was any good or not, which could be potentially awkward.
There was a better solution however much closer to home than I initally realised.  There are at least 6 charity shops in my area dedicated specifically to selling second hand furniture (most of which are run by the YMCA).  One of these was about a 5 minute drive from my house.  I did a tour of a few of them to see what they had to offer.  In one of them, where a dining room table and chair set was priced at around £90,  I quizzed one of the volunteers in the shop about how they price tables
Apparently second hand dining room table buying is seasonal and prices are highest around Christmas time, when families who don’t have space for a dining room table all year round, will buy one for the holidays.  Often they will then give the table back to the shop afterwards to sell on, thus getting a cheap table for short term use and helping to make money for charity.  What a great idea!
University students and landlords letting to students are more likely to want tables and other items of furniture (especially second hand beds) at the beginning of the academic year, so prices may be higher at those times of year as well.
I couldn’t see anything I liked in that shop, so I moved on, with the encouragement to keep looking from the volunteer and went to the one closest to my house.  There I found an absolute gem, which I purchased immediately.
It was a round table that could easily seat six around it, which also extended further.  It was very solid and stable (which was important to me with two small children who like to crawl under it).  It was a bit smelly and quite filthy, but otherwise was in good condition.  I checked that there were no holes in it, which could indicate woodworm or wood beetle.
It was priced at £15!  The charity shop offered to deliver it to my house for another £15, so for a total of £30 it was mine.  I decided that if I couldn’t clean it up to my satisfaction when I got it home, then I would give it back to the charity shop and would be able to feel good about spending the £30 regardless.  The charity shop delivered it the next day and it cleaned up just fine.  I won’t be buying a new table anytime soon.  I have no need to.  If I wanted something like that new, it would cost around £300!
I felt good about my purchase for quite a few reasons, which were as follows:
If you liked this post, I would really appreciate it if you click like on Facebook and follow on Twitter – Thanks!