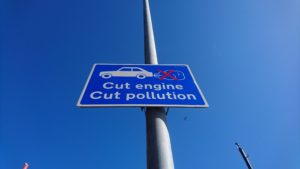 Is idling damaging your car and the environment?

During the summer holidays I went for a jog. On my travels I went past a level crossing and noticed a number of cars idling waiting for the crossing barriers to come up. I have to admit to idling my car at times. Mainly when I don’t think I’ll be waiting long e.g. at traffic lights.These cars weren’t going anywhere any time soon though. The barriers were down and the train hadn’t gone past yet.

I wondered why they didn’t turn their engines off. There was even a sign saying ‘cut engine, cut pollution’. It didn’t seem to be having much effect at all. I wasn’t judging, just curious, because as I said I idle my car at times. So, I turned to Twitter and my Energy Saving tips and tricks Facebook group to ask if they idle, and if so why?

Why do people idle their engines?

It was interesting because I got three types of responses;

My car is about 13 years old, so I wouldn’t put it under the new car bracket. The responses made me wonder if turning my car on and off too often would damage it.

So what is the truth? Is idling my car better or worse for it and the environment?

I’m not sure whether my car counts as an older car or not. However, this article from the RAC confirms that turning the car on and off too often isn’t good for older cars. If you don’t want to damage their engines, you should leave older cars idling

However for newer cars there are no benefits to idling and there are downsides. Idling can actually damage your car! Apparently it isn’t good to idle your car before starting it in winter to warm it up either and cars heat up quicker and more efficiently when you are driving.

Whether or not it is good for your car, there are good reasons not to leave your engine idling though:

So, I think if you are going to drive, do it in the most eco-friendly way possible and turn off your engine where possible instead of idling!

What about all the other people that idle unnecessarily?

One of my Facebook group members commented that police officers are often found sitting in idling cars and another member said that he has knocked on people’s windows and asked them to turn their engines off! He was inspired by Nigel Havers and I was inspired by him.

Soon afterwards I walked past a police officer sitting in a parked idling car. I knocked on the window and said ‘do you need to idle? Could you turn your engine off?’. He got a bit defensive and said he was just leaving and continued to idle, which I found a bit disappointing, but it hasn’t deterred me from trying again another time!

If you are feeling brave you could knock on someones window who is sitting in the car with the engine on unnecessarily and politely ask them to turn their engine off!

Also take a look and see if there are any projects local to you, which are trying to tackle the problem of idling. I’ve recently discovered there is a project in my town called Breath in Brighton. I am going to look into finding out more about it! If there isn’t anything local, maybe you could start something up!

What are your thoughts on idling? How does idling affect you? Come and join my Energy Saving tips and tricks Facebook group and let me know what you think!

If you liked this post, you might enjoy reading how I kept warm for less last winter