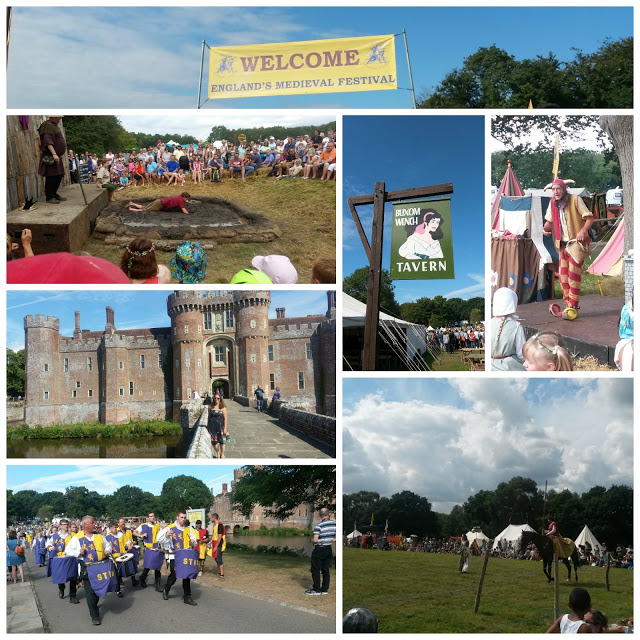 In August 2016 we had a lovely day out.   Glorious weather alongside the beautiful backdrop of Herstmonceux castle and it’s grounds set the tone for the fantastic Englands Medieval Festival which was in it’s 24th year! They very kindly invited us along to try it out and we absolutely loved it.

Our kids love visiting castles especially on medieval re-enactment days. Although we have been to a few of them, we have never been to one quite like this. Englands Medieval Festival had some similar activities to the other events, but there were a lot more activities to choose from.

What entertainment was on offer?

At the beginning of the day there was a grand parade. It was then followed by a big battle. The battle involved swords, guns, archery and more!

Throughout the day we saw show after show. Shows included knights jousting, a falconry display and a puppet show. Plus a jester, a sword display, drumming, singing and some story telling. There were around 6 stage areas with activities going on at each stage throughout the day.

We also went for a meander around the castle grounds and around the tents filled with medieval wares and craft activities. It’s so great to see people keeping the skills, arts and crafts of medieval times alive. I love finding out how things were done, before machines made everything. We didn’t get to see and do everything because there was so much going on at Englands Medieval Festival, but there’s always another year!

We stayed until the end. As a last fun touch to a great day there were drummers bidding everyone goodbye.

We didn’t pay to get in, but in advance the tickets for Englands Medieval Festival were £44. On the door it would have worked out to be £58 for a family of 4. There were also options to go for the whole weekend either camping or staying in other types of accommodation.

I think £44 is great value for money for a family day out as it is a full day’s worth of entertainment and back to back shows. It would be easy to spend more than that on a family of four just going out for a meal let alone going to see a show or to a theme park!

How can you keep costs low on the day?

We saved money on the day by taking packed food, snacks and drinks as well as dress up stuff for the kids with us. In their case we took swords, shields and armour so that they wouldn’t want to buy it all when we got there. We found some of it in charity shops or car boot sales and some had been gifts from grandparents!

We didn’t avoid spending money altogether – we bought a bit of food at the end of the day and my older son bought a wooden dagger, but it was significantly less than we could have spent!

Would I recommend Englands Medieval Festival?

Overall it was a fantastic day. We all had a great time and I would highly recommend going there for the day.

I can’t say what it would be like to go there for the whole weekend, as we didn’t do that. But it would mean you could do more activities at a slower pace. It would be more expensive, but you could save money on camping equipment by planning ahead.

If you do decide to go, let me know what you thought of it in the comments below.