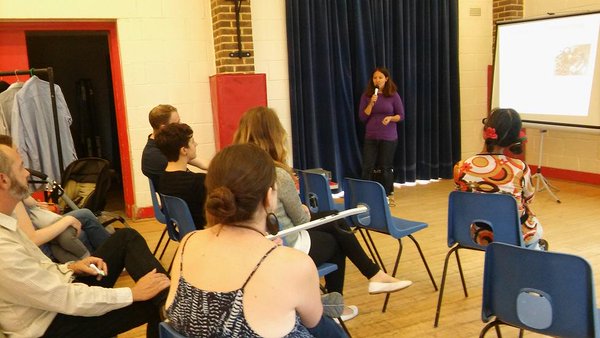 I was so excited when a few weeks ago the manager of my local community centre got in touch saying that she wanted to plan an event for Zero Waste Week and asked – could I help and did I have any ideas? Unsurprisingly I had a few ideas and then some! I volunteered to do a talk and suggested that we do various swaps and we got planning!
On the day we actually did a toy, DVD, book, clothes and food swap. We had several tables out – one for each type of thing and a clothes rail. We let people bring and take whatever they wanted. I knew from my experience of hosting a clothes swap (read more here) that often people tend to bring more than they take. Any leftovers were taken by Emmaus and Hangleton Food Bank. The community centre had some stuff to start off with which filled the tables up before people arrived. I managed to get rid of a few bits and pieces too! 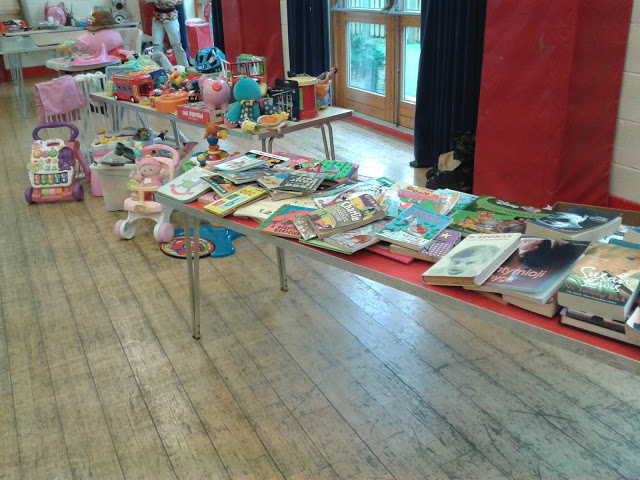 Hong Dam (@HongDamArtist on Twitter) a local artist came along and did a junk mural workshop. Everyone joined in to make a picture of Brighton with the Pavilion, the wheel, the South Downs, the sea and the community centre in it out of scrap from magazines and other scrap materials. I am not an artist but had a go – I did a little bit of the sky and added some red mesh to the Brighton Pavilion (my artistic interpretation of it 🙂 ). We were all pretty pleased with the result, which I think is now hanging in the community centre. 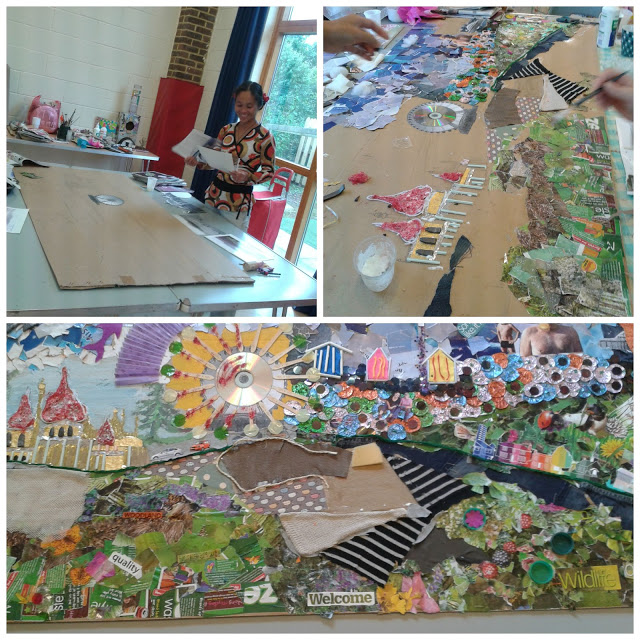 This mural is a bit different to Hong Dam’s usual amazing artwork – take a look here.
@Crafttheworld (on Twitter) from the wonderful Greenhouse at Emmaus (find out more about them here) came to provide some inspiration on how things can be upcycled into planters and was also selling some of their honey. I had planned for him to be in the picture, but he was too busy helping out with the mural! 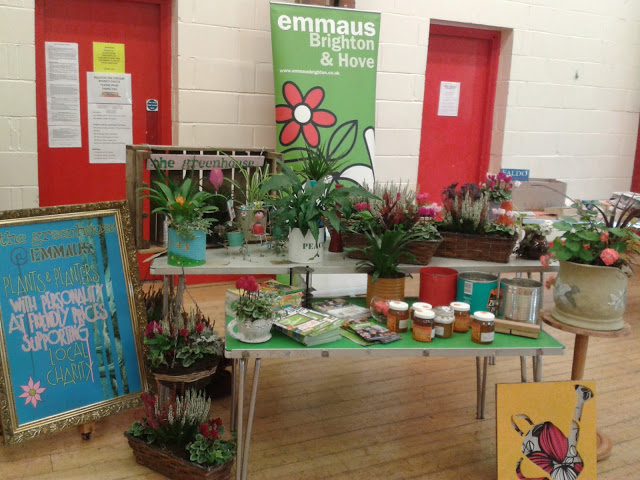 You can see in the picture some old tins that have been decorated and turned into plant pots. At the shop, they have some beautiful arrangements in all sorts of things including an old briefcase filled with cactuses!
Cityclean were also there and I had an interesting chat with them about why there is no food waste collection in the city (apparently it isn’t cost effective) and the problems with community composting schemes (unless they are closely monitored sometimes people put the wrong things in them, which can cause all kinds of problems).
Around half way through the day I did my talk. I decided to focus on three things that were relevant to the day. I talked about the problems of fast fashion, food waste and using disposables. I explained how the alternatives were better for the environment (e.g. clothes swapping, food sharing – read more here – and using reusables) and are a lot less expensive. I also explained a bit about Zero Waste Week and the theme for this year – reuse.
All in all I really enjoyed the day and hopefully there will be more events like it coming up – I’ve already booked in to see the manager at the community centre again in a couple of months to discuss what we could do next!
What did you get up to during Zero Waste Week? Don’t worry if you weren’t involved this year, you can sign up here and join in next year!
If you liked this post please click like on Facebook and follow on Twitter – thanks so much!
Tagged: zero waste weekpast challenges