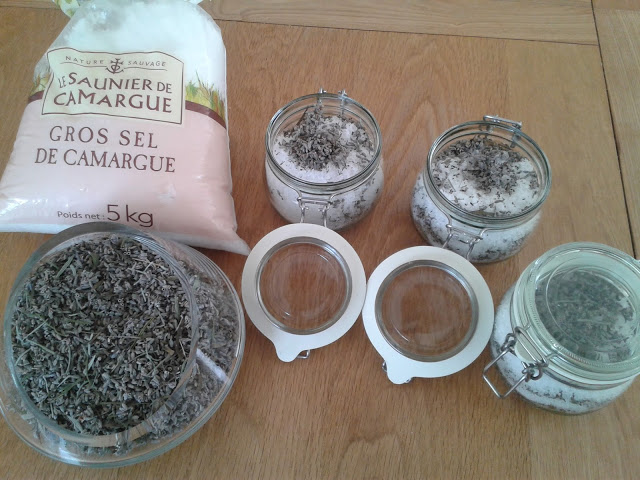 Recently I have been on a decluttering mission! Several months ago I harvested all the lavender flowers growing in my garden (we have a whole border of them) and put them in a big bucket where they remained.  My intention was to strip the flowers off the stems and do something with them. I finally got round to it and filled a few jars of lavender flowers mixed with salt and a vase with plain lavender as pot pourri as you can see in the pictures above and below! I also found when I was stripping the flowers from the stems that lots of seeds fell out, so now I have a little jar of lavender seeds! 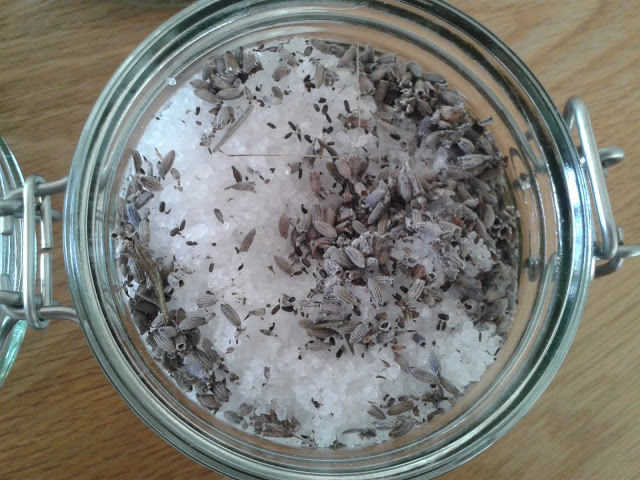 Method:
Cost:
I actually bought the jars pictured above from Ikea and paid 80p each for them. Yes really I went to Ikea, but I had a good reason – I was taking advice from one of the comments on this blog post here. The lavender grew in my garden so didn’t cost anything except my time (the plants were a gift) and the salt I bought in bulk in France when we did our house swap a couple of years ago (read more here). We went on a tour of a salt marsh in Aigues Mortes, which I found fascinating and saw the different stages the sea water needs to go through until it evaporates entirely and becomes salt! I think I paid around 6 euros for 5kg’s of really good quality very attractive sea salt! For one of those lavender salt jars it cost me around £1. Alternatively you could spend £14.50 here on a very similar product, although it contains lavender oil instead of actual lavender – you could put a few drops of lavender oil in the bath as well if you feel the need!
The environment:

If you are thinking of making these bath salts
If you are looking for other ideas for things to do with lavender, lavender wands are lovely – see how to make them here, bunches of lavender in vases look beautiful and lavender also tastes great as a herbal tea – make sure it hasn’t had a pesticides or anything sprayed on it first though!
If you liked this post please click like on Facebook and follow on Twitter – thanks so much!