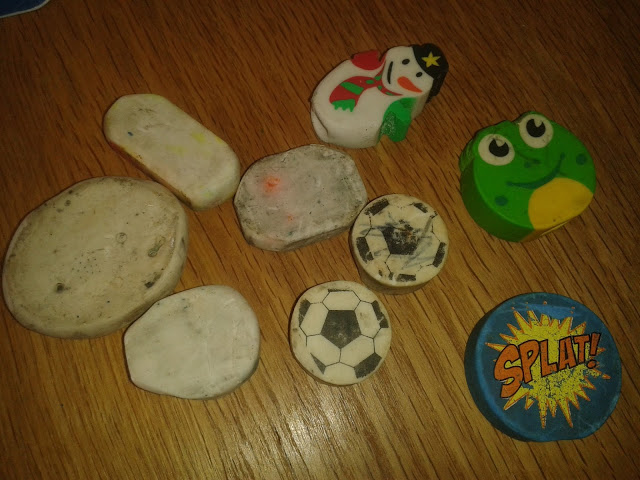 Why is decluttering so hard and how can it be made easier???

I spent a good few hours sorting out and decluttering our stationery recently. That is ridiculous on so many levels but just sorting out stationery threw up lots of issues for me.

Why is it ridiculous?  Well mainly because first of all we don’t have that much of it and second of all why did I need to spend more than 5 seconds thinking about whether to keep something like a sharpener or not?

I decided to sort out our box of stationery because it was overflowing and it was becoming difficult to get the box in and out of the cupboard and to find the things we need. I also hardly ever (if at all) used a lot of the things in it. My aim was to cut down the stationery in our home so that we only actually have the things we need, not the things we don’t use. I wanted to get rid of everything that didn’t fit that aim, but I didn’t want to throw anything in the bin.

The problems I faced were:

After picking up a few items and thinking far too much about each one, I decided I was going about it the wrong way. I decided instead to make a pile of the things we need and use regularly now and then work out how to get rid of everything else.
This worked really well for me and I soon had a bag filled with stuff I didn’t want. I also decided to only put out one pen, one pencil etc in easy access rather than a whole load of them and only add to it if I needed to.

That was great, but I then had to work out what to do with the bag of unwanted stuff. I had a chat with my husband about it as I didn’t want to get rid of stuff that he might use or need, but I also didn’t want to go through the stuff piece by piece (I just stopped myself from doing that and I had spent far too long on this already).

Between us we had two ideas:

In reality just having the conversation was useful as he confirmed that yes he does use the staplers (not for stapling bits of paper – he used them to fix my flip flops when the strap fell off and to provide a temporary fix for a hole in a bag) and he didn’t mention anything else I was planning to get rid of.
So the next job was to find a way to get rid of the stuff that needed to go without chucking it in the bin. I considered giving it all to my kids school, but was worried they would think I was dumping my rubbish on them (especially as I keep turning up with bags of stuff after school e.g. old uniform, toys, games, books and fabric). I consulted with a very helpful Facebook Group – Zero Waste Heroes over the rubbers and the discussion prompted a blog post on the Zero Waste Week blog about what to do with old rubbers (read more here).  The only suggestion that really worked for me though was to give them to the kids school. I decided there is no harm in offering and the school doesn’t have to take it if they don’t want it!
Although my stationery decluttering experience was fairly frustrating and took way too long, I learned from it and a few days later I managed to clear a whole load of stuff in my bedroom that had been piled up to sort through much quicker than I would have done because I didn’t sit and agonise over each thing. I also gave myself a time limit of dealing with it within 1 hour which helped. My decluttering adventures are no-where near over yet though and I’m sure I will be writing about them again soon!
If you liked this post please click like on Facebook and follow on Twitter – thanks so much!
Tagged: decluttering