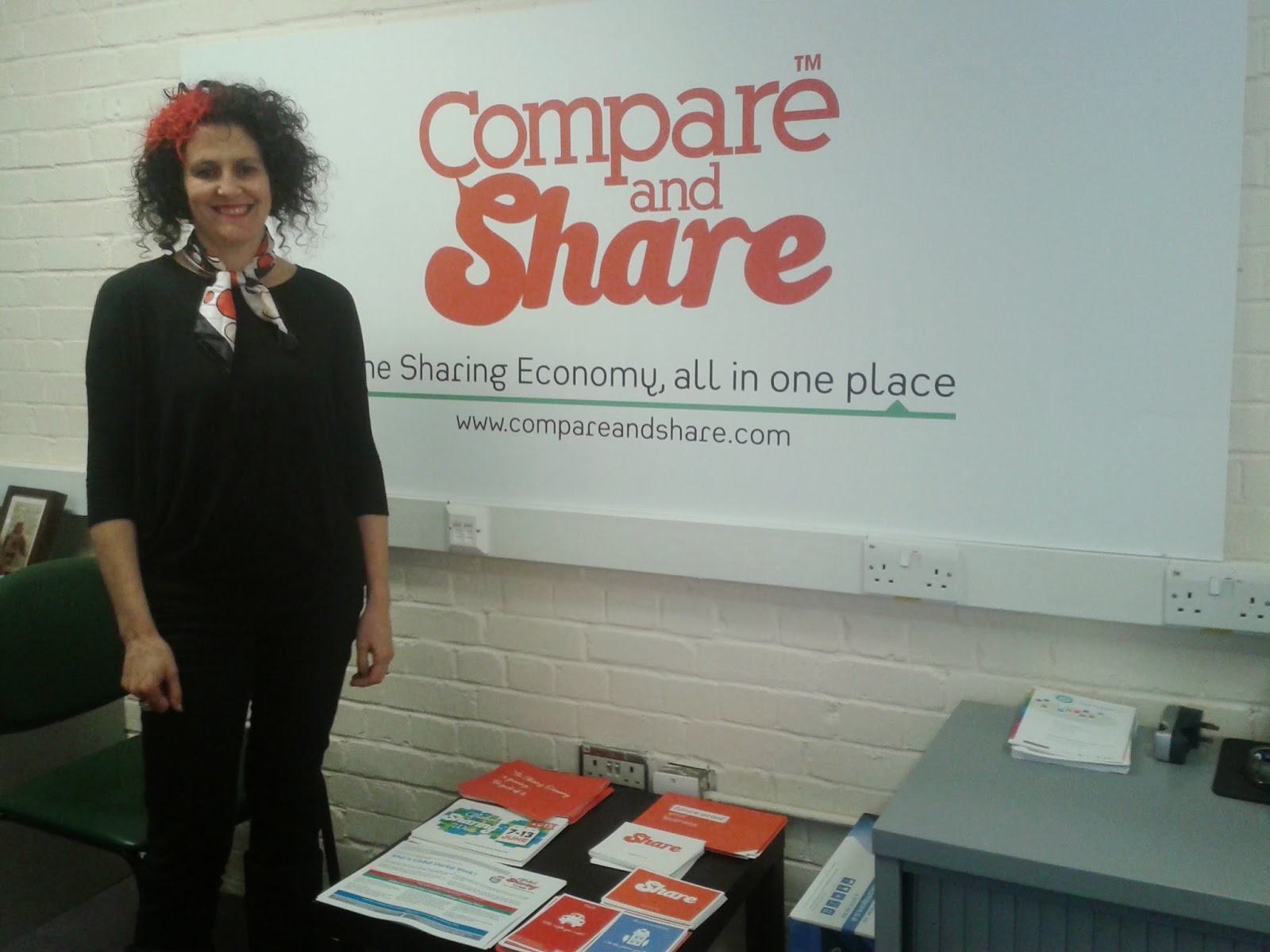 An interview with a sharing expert – Benita Matofska! 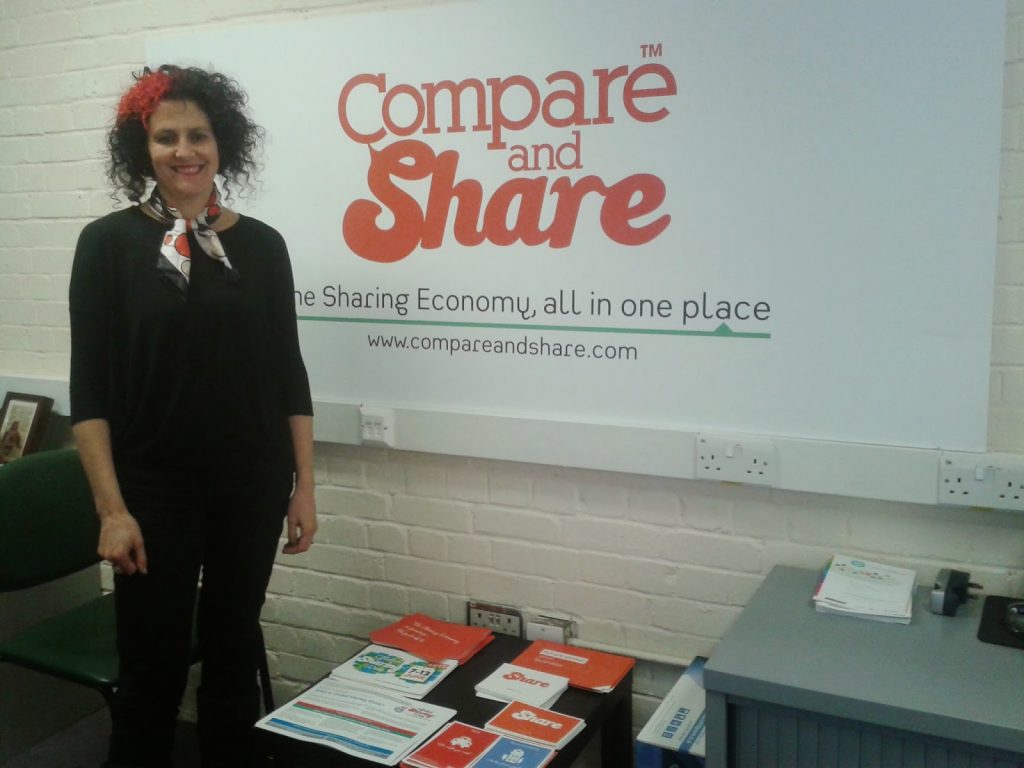 Benita Matofska says she saves £20,000 a year through sharing. She does a bit more than just share her stuff though, she also recently founded Compare and Share – a comparison website where you can search for people’s rooms, homes or cars to rent originally listed on various different websites. She lives in the same town as me and I just had to get in touch and find out more.  She very kindly agreed to meet with me and let me interview her.  I had a few questions prepared for her, but her story was so interesting that mainly I just listened and took notes.

I asked Benita to tell me about what she did before she got involved in the sharing economy.
Benita worked in broadcasting for over 20 years.  She worked on radio and TV both on and off screen. She lived in New York for several years working for the BBC and eventually came back to the UK. Over the years she became very disillusioned with the TV industry. To her it seemed that the industry was locked in old more traditional ways and wasn’t moving fast enough.
Benita had a drive to make
an impact, create a difference and do something good in the world, so she left TV and went to work in the charity sector for a year. She worked for Enterprise
UK where her role was Head of Global Entrepreneurship (GE). During her time in this role she was invited to present at One Young World Congress which took
place in London in 2010 – an event all about giving young people a voice. She ended up presenting alongside Desmond Tutu and Bob Geldoff and felt incredibly inspired by her experience. In that moment she decided the
next thing she would do would be about making a big positive change in the
world.

I asked what sparked her interest in the sharing economy?

After the Congress the word that kept her awake at night was sharing.  She just
couldn’t get it out of her head. Benita didn’t know what she was going to do, but she
knew it would be do with sharing.  Her
friends weren’t sure what she was doing. Her dad said where’s the money in that.
Interestingly now we know the sharing economy was recently valued at $15 million globally and is predicted to rise $335 billion dollars by 2025!
One
morning she woke up and decided that one of the key problems with the world is that there is a shortage of sharing. She became excited about the possibilities this presented and felt that the situation could be fixed as each of us having unlimited potential to share.

Benita told me how her interest in sharing led to her setting up a not for profit organisation.

On Jan 17th 2011 The People Who Share (read more here) came into being.  Benita set it up as a not for profit campaign to help build a sharing economy. It’s mission is to educate, raise awareness and help people discover the sharing economy.

Benita began to run events in Brighton called Crowdshare via the People Who Share. The first event was during
the Brighton Festival Fringe in May 2011, which was held in the Brighton Youth Centre on
Edward Street.  They had a giant clothes
swap, had a big art share, had a big picnic, had a sharing market area which
was all the local sharing services that existed at the time in Brighton so
people could sign up for sharing goods, car share, seed swapping, skills
exchanges, time banks. There were musicians who came and shared their time and
their talents, skills exchanges – young people teaching old people to
skate.  That was a great success. They continued putting on those kinds of events and did a number of those.

National and then Global Sharing Day

In 2012 Benita decided to run National
Sharing Day.  She decided to do it 6 weeks
before the day, she had no money and only a few people helping.  People told her she was mad – she didn’t have the resources and how on earth was she going to do that? Benita said what is the worse that can happen and gave it a go. On the 20th June 2012 it happened and it went
viral!  People were tweeting from the Ukraine, the Phillipines and all over the world wanting their own national sharing day.  So this led to her running a global sharing day on November 14th 2012. You can see her talking about this day in the video below.
They ran another global sharing day partnering with various other organisations on June 2nd
2013 and they had 3.65 million people sharing food. There was a big launch event with
Caroline Lucas (Green MP for Brighton) at the House of Commons who was very supportive.

I asked Benita to tell me about Compare and Share

Soon after founding The People Who Share Benita was trying to book a family holiday online. Her family like to have a local experience when they go on holiday, they like to rent from local people and get the local intel. She was tearing her hair out as she was trying to trawl through all these diffferent websites to find the info she wanted. She would get 15 millions hits on google. Friends had the same problems and she was sure there had to be a better way.  She decided what was needed was a one stop shop for the sharing economy – a comparison marketplace. Benita wanted to access shared stuff in the same way that when you book a flight you go to a single site and it brings up all your options, That was the birth of Compare and Share because it wasn’t easy and she felt that people aren’t going to do it in great volumes unless it is easy.

In January 17th 2013 Compare and Share
was officially born – (it coincindentally shares the same birthday as The People Who Share). It is a social business and a for profit
company. They have ambitions to become the next big tech brand and their vision is
to open up the sharing economy a bit like Ebay opened up the secondhand goods
market – they want to make it discoverable for everybody.

They started the platform with car and ride sharing and got 90% of the UK market on the platform – very quickly you could get a
series of options to travel from Brighton to Bristol and so on. At the end of 2013 they launched accommodation and now give access
to over 1.2 million properties via a network of affiliate partners e.g.
houseshare.

Benita explained the opportunities that have arisen from Compare and Share.

Because they are known as global sharing experts, what
started to happen is that businesses would come and ask them to provide
consultancy or give talks – in London in June 2013 Benita presented at Le Web and the
whole theme was on the sharing economy. Following that she was contacted by someone
from Macmillan Cancer Support because they wanted to build a peer to peer task
sharing platform to connect volunteers to run errands for people living with
cancer e.g. someone needs the shopping doing, laundry doing etc. They worked
collaboratively with Macmillian on a year long pilot project goteamup.org.uk. It
started out just in Brighton and Hove, but they have now been scaling it up across East and West Sussex and she is sure it will go further afield. Other companies have approached them as well.

Benita feels that business has changed forever now that people can trade directly
with other people using technology. She thinks that in order for businesses to future proof themselves they need to find ways to be part of the sharing economy. Companies the world over are starting to look at different
ways of getting involved and one way corporations can get into this space is by buying. Zip Car was acquired by Avis in 2013. BMW have invested in Just Park and
they also have something called Drive Now – all different forms of car clubs,
most of the major car companies like Peugeot or Daimler have all invested in
car sharing in some form.  Benita feels there is a massive shift
in how we are leading our lives and that people are choosing to access rather than own
goods.

I wanted to know how she managed to save herself £20,000 a year through sharing and asked her how she did it. Benita replied as follows:

In her TV days Benita would think nothing of spending a few hundred pounds on a top.  When she left TV her salary went down to a third of what it was and by then she also had 2 kids.  She couldn’t sustain her previous lifestyle and didn’t want to.
I asked Benita how Compare and Share works with membership only sites as you need to sign up to a lot of these sites to be able to use them.

Basically Compare and Share is an affiliate link site.  If you want to rent out a car listed with Zipcar for example you would click through the link to Zipcar and sign up to be a member.  Compare and Share would then get a referral fee.  In the longer term they are looking to implement a oneshare login. This would mean people could log in once to Compare and Share and then be logged into a variety of sharing type sites at once.
My next question was about lawnmowers – what will be the future of lawnmowers if we all share them?  I asked this because it was one of the examples given  in Mark Boyle’s Moneyless Manifesto – if we all share lawnmowers, ladders and so on and demand rapidly drops companies would have to completely rethink their businesses and they may not be able to produce certain items at all any more (or only at very high prices).
Benita replied that there are going to be casualties in this – e.g. lawnmowers companies going out of business.  She feels inevitably what will happen is there will be more businesses built up around restoration and repair.  There will be a move away from traditional manufacturing to different kinds of manufacturing, lots of recycling, upcycling and the mining of landfill sites.
I could have spent longer talking to Benita but sadly at this point we both had to end the interview.
I found it a really fascinating couple of hours talking to Benita and thanks to her for taking the time to speak to me!
I’m really intrigued as to what the rise of the sharing economy will mean for the future and am very interested to hear your thoughts on the subject!
If you liked this post please click like on Facebook and follow on Twitter – thanks so much!
Tagged: Benita MatofskabrightonCan I earn £10000 in a yearecoFrugalGreenInterviewthrifty 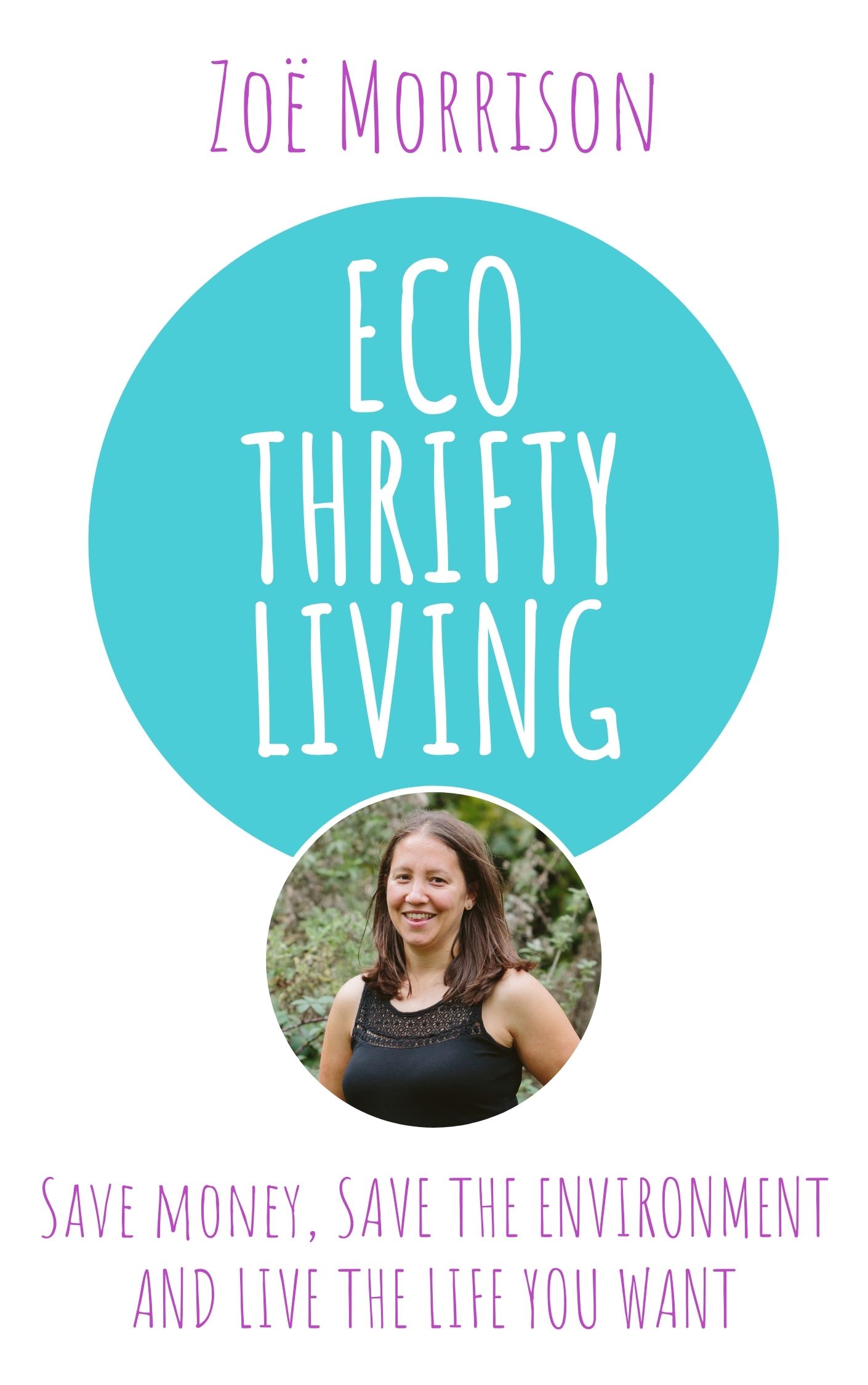