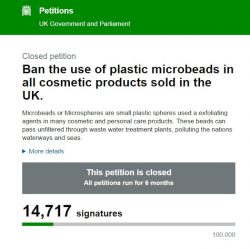 It was announced on the 5th September that the government is going to ban Microbeads in 2017, which is just great! I wrote about the petition to get microbeads banned back in December 2015 and the government has listened after the combined weight of the petition and a report from the Environmental Audit Committee! Well
-> Continue reading Microbeads are being banned in the UK! 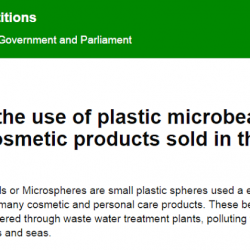 Plastic that is designed to be used once or twice and then thrown away is a massive problem. It can kill wildlife big and small, as well as get into the food chain and has accumulated in our oceans on a grand scale. Just as frightening as the large plastic that gets into our waterways
-> Continue reading Help get plastic microbeads banned!