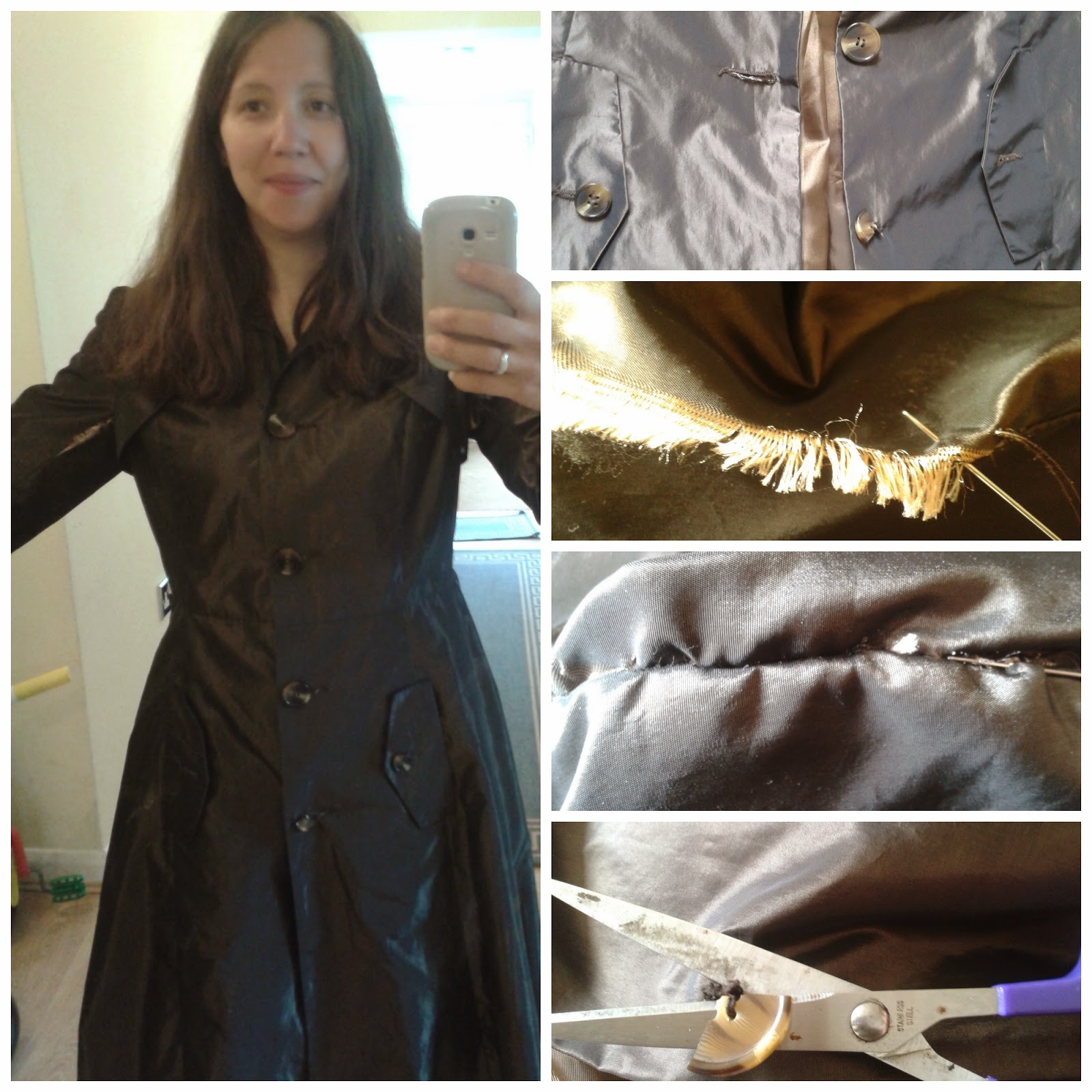 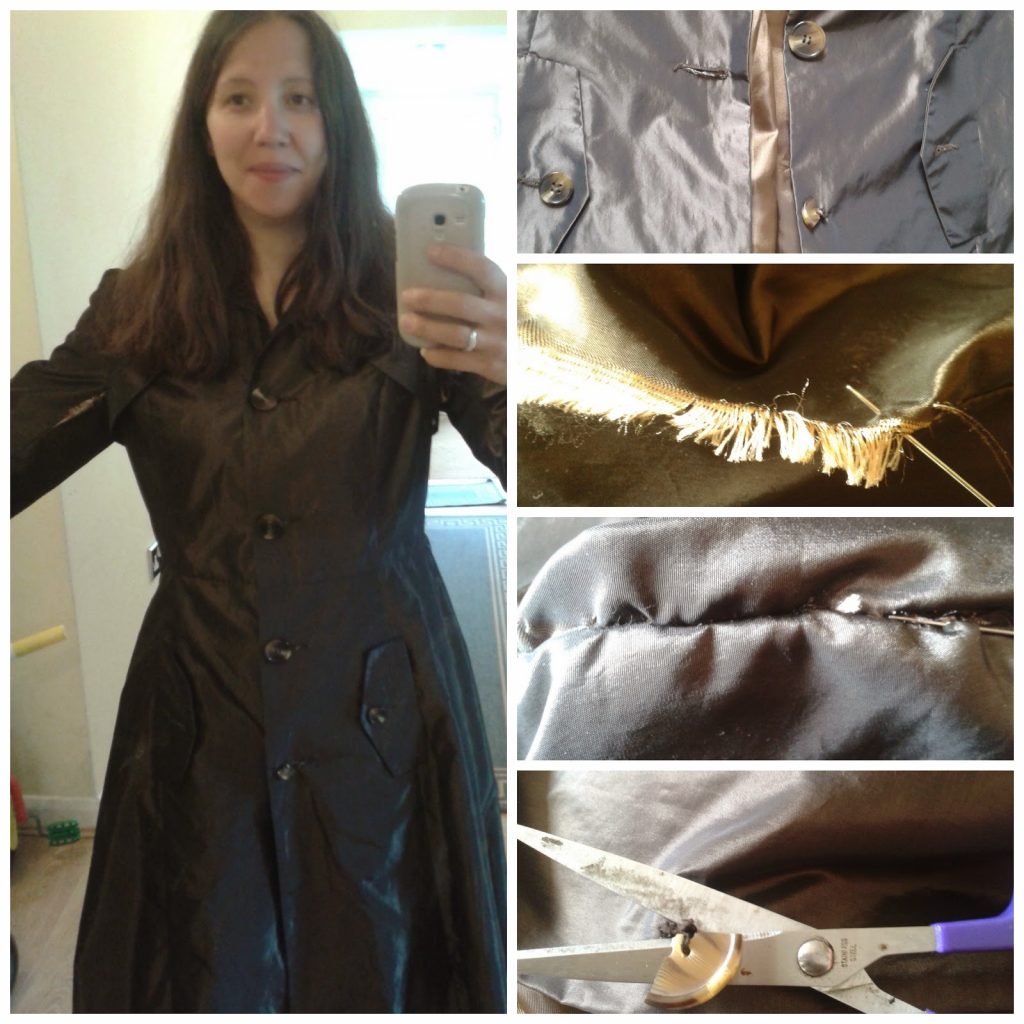 I promised to share some of my mends from my recent mendathon (read more here)  and the brown raincoat one is first on the list.
It had come apart at the seams under both arms (as you can kind of see from my mirror selfie…), had one broken button and one missing button.
I decided to hand stitch the seams back together as machining them would have been much too tricky. I first stitched around the frayed edges to stop them from fraying further and then stitched the seams back together, using what was supposed to be an invisible stitch (see a very helpful tutorial for that here), but as you can see from the picture it wasn’t the best stitching…
I cut off the broken button and the button from the pocket.  The pocket button was slightly smaller than the other buttons but I decided it didn’t matter and replaced the bottom button with the pocket button.
I have a box of full of buttons.  Some are spares that came with clothes, some were given to me by my mum (and I think originally from my granny years ago) and some I have collected over the years.  I found two buttons which were similar (but not the same as) to the buttons on the jacket and replaced the pocket buttons with them. Sewing buttons is really easy, but it is important to leave a small gap between the button and the fabric and then wind the thread around that gap when you have finished sewing the buttons on (it explains it better here), before finally knotting off the thread.

That was it, it sounds simple, but somehow managed to take me hours and hours.  I doubled up the thread while I was sewing to make the mend stronger and hopefully last longer, however it is easier for the thread to get stuck when you double it up and I spent ages untangling knots, but I got there in the end as hopefully you can see from my highly professional photography below 🙂 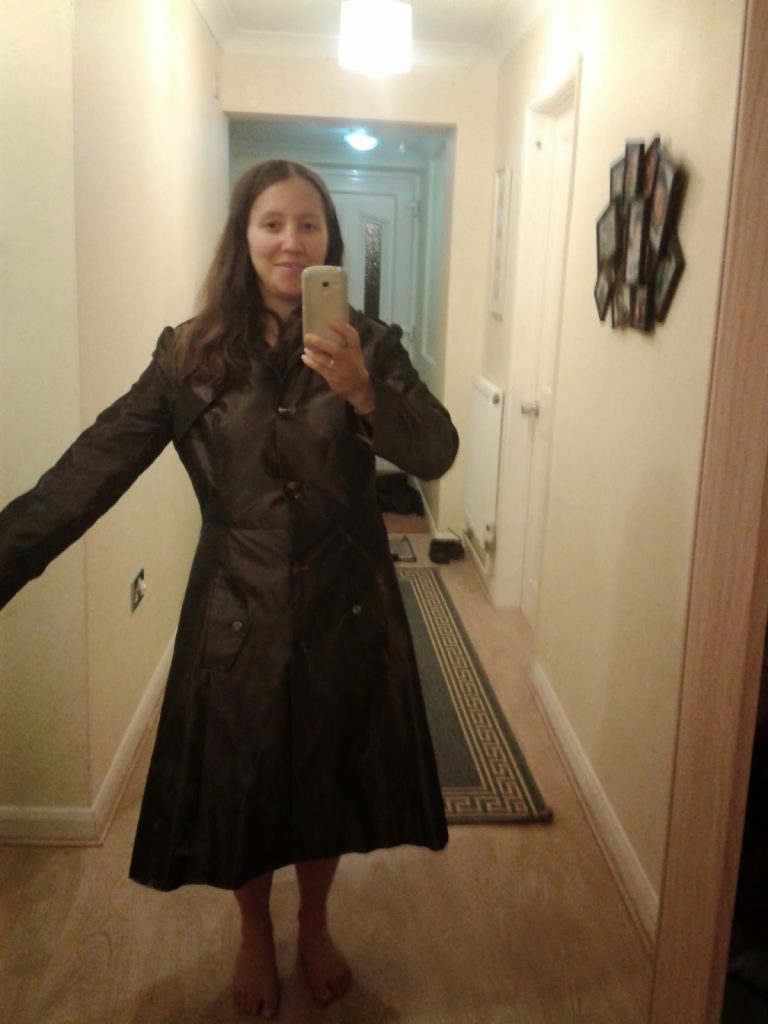 I really like the contrasting buttons and the fact that I already had everything I needed to fix it. It’s great to be able to wear my jacket again and although mending it was very frustrating at the time, it is very satisfying to tick it off my mending list.

I am currently undertaking a Year of Eco Challenges . If you have a moment I would really appreciate it if you would consider sponsoring me with an action (no money involved) on my DoNation page. Also if you liked this post please click like on Facebook and follow on Twitter – thanks so much!