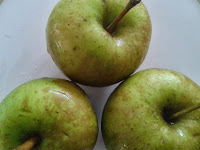 Yesterday I announced that I plan to avoid shopping in supermarkets until the end of my Year of Eco Challenges i.e. 26th September 2014. I have to admit the whole idea of not being able to go to a supermarket scares me a little.  I have been so reliant upon them for such a long time, will we really be able to get everything we need in other shops?
Feeling worried about the whole idea I have started shopping locally already and a couple of weeks later am finding it is ok so far.  I am running out of certain things that I am wondering how I will replace though – anyone know what kind of local shop if any would sell frozen peas???
To start off with I went to the Lewes Food Market which runs every Friday morning.  I went there because I know they sell local organic food and I wanted to see if I could really do my shopping there.  The first time I went I literally just went to look.  The second time I went I actually did my shopping there.
I had a strange conversation while I was there with someone who was selling apples.  I asked him if they were organic and he told me they weren’t and basically started having a rant about why he thinks organic food isn’t all it is cracked up to be.  The conversation was strange because most of the people around him were selling organic produce and that was the reason I was at the market!

He said something along the lines of ‘you do know that they spray organic crops with pesticides don’t you’ (which actually I didn’t).  He then went on to say that he thought modern synthetic pesticides were far better than organic ones as they target particular pests, whereas organic ones just kill everything (his words not mine). He said that he sells his local apples to a major supermarket and that they test for pesticide residues on the fruit and would reject them if they found any. Apparently they do use pesticides on organic crops as this article explains, however the soil association paints a much rosier picture of organic farming here and claims that organic farming methods can help to reduce greenhouse emissions.

I have been buying mostly organic food though for some years now as I always thought it was better and realised I never really questioned exactly what organic means and how the food is grown. The use of pesticides is now another thing to add to my list of the problem with organic foods. I’m not so sure any more about sticking so rigidly to an organic diet and I did end up buying some of his apples which were a fraction of the price of the biodynamic ones being sold on the stall next to him.

I asked the question over on Twitter and Facebook whether given the choice people would prefer to buy local but not organic food, or organic but not local food and most people felt that it was more important that the food was local than organic.  They said local food will be the freshest, it has travelled the least food miles, it is less expensive and buying local helps to support local businesses.

There was one person who recommended reading Jay Rayner’s book about food production – A Greedy Man in a Hungry World: How (almost) everything you thought you knew about food is wrong.  Jay argues that food miles aren’t the only carbon cost of food production and that sometimes something grown further away and transported has a lower carbon footprint than something grown closer to home as you can see in his trailer for his book here.

What do you think – is it important to buy organic food whether it is local or not, or is local non-organic food fine?  Or even is local and organic food a bit irrelevant as Jay Rayner argues and should we be asking to see information about the carbon footprint of the food we buy regardless of where it is from?
I have given up supermarkets as part of My Year of Eco Challenges   If you have a moment I would really appreciate it if you would consider sponsoring me with an action on my DoNation page. Also if you liked this post please click like on Facebook and follow on Twitter – thanks so much!
Tagged: carbon footprintecoenvironmentFrugalGreenlocalorganicsupermarketsthriftyyear of eco challenges