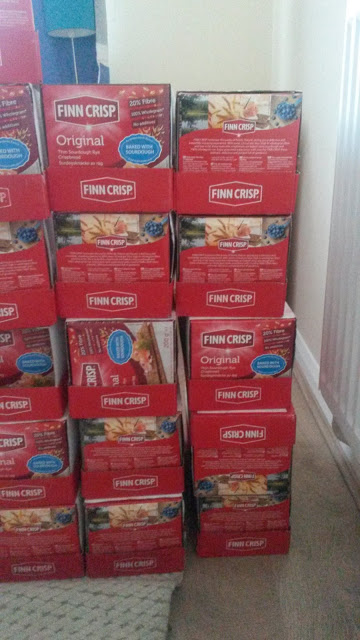 Olio is a new food sharing app designed to get businesses and individuals giving away their unwanted food. I am totally in favour of unwanted or surplus food being redistributed as it stops it being chucked into landfill, which is bad for the environment as it can give off methane in landfill, not to mention all the pesticides, fertilisers, water and carbon used to grow, process, transport and sell it. It also makes no sense to throw perfectly good food away when there are so many people living in food poverty in this country. Whether you are living in food poverty or not it is still better that good use is made of something that would otherwise have been thrown away.
Often when I talk to people about food waste they tell me that they don’t waste any food, but I challenge anyone who says that to keep a food waste diary for a week to see what is really going on (take a look at a food waste diary I did here to get an idea of whats involved). According to lovefoodhatewaste.com households in the UK are responsible for roughly a staggering 50% of food waste and it costs the average family around £60 a month – what a waste! There is a lot that can be done to avoid wasting food in your home (read more here), but even people with the best intentions will occasionally find themselves with surplus food. Apps like Olio are a great way to divert perfectly good food from landfill, as well as helping people to find food for free!
I haven’t given or received any food yet on the app, but I did sign up and the Olio administrators sent an email round to everyone who had signed up locally recently to say there was a whole load of surplus food being given away at the end of a food festival and did anyone want to come and pick some up. I definitely did want to do that and ended up filling an entire car full of the stuff – I am so glad I signed up to the app! I will be able to eat some of it, but not all of it, so I have been giving a lot of it away.
Food sharing has been on my mind for a while now, ever since I set up a food sharing Facebook group to try and get people sharing food in my local area a couple of years ago (read more here). I don’t have any extended family near me and I don’t really know my neighbours as if I did I would probably give any surplus food I had to them. Before I started my group it would never have occurred to me to offer food I couldn’t use to friends and I wasn’t sure how they would feel about it. I remember feeling a bit weird about food sharing at first, but now it feels perfectly normal.
I think that food sharing groups and apps are a really useful tool to get people thinking about food sharing and food waste. They are also a really easy way to communicate with other people about the food you want to give away. I think they work best though when signed up to by pre-existing communities, because food sharing small amounts of food only really works if you don’t have to go too far out of your way to get it. I’m not going to travel to the other side of town to get a bag of rice because the cost and time involved just isn’t worth it, but I would take it from my neighbours or someone I saw on the school run. Also some can find it a bit worrying to take opened food from strangers (e.g. half a box of biscuits), but less worrying if it is someone they know.
Olio is fairly new in my town, but the more people that sign up, the more it will gain momentum and they have a team behind them to help make it happen. Find out more about them, sign up here and to make it work I recommend getting your community involved too!
If you liked this post please click like on Facebook, follow on Twitter and follow on Instagram – thanks so much!

3 thoughts on “Free food via Olio!”