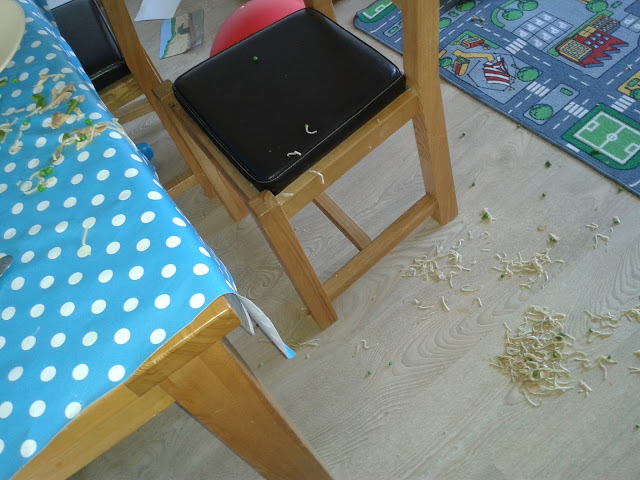 What does it really mean to waste food?

Today was the start of National Zero Waste Week – the week where this year the plan is to waste no food! Well I didn’t do a particularly good job of that today.  It started off with some milk that had gone off, progressed to me cutting open an under ripe plum, then went on to involve my younger son not finishing his lunch again and then throwing his entire dinner on the floor (as pictured above)! I also found 3 mouldy blackberries…
Oh dear! What happened?
The problem with the milk was two fold.  There were actually two lots of milk that I found that were past their sell by date.  One was on the top shelf of the fridge and I just didn’t notice it because it was too high up. The second was part of a buy one get one free offer and I didn’t use it up in time…
The under ripe plum has a story behind it which I will blog about soon.
We went to a friends house late afternoon and my younger son munched his way through the contents of their cupboards.  He just wasn’t hungry at dinner time and I wasn’t quick enough to stop him chucking his dinner on the floor! The dinner thrown on the floor was not replaced with anything else – there were a few scraps I managed to save, but he didn’t even want that!
What could I have done differently?

1. Tried to salvage some of the wasted food
I thought about this and did a bit of reading about whether you need to follow the use by date on milk – it smelled ok, but this article here suggested that you shouldn’t trust your sense of smell and that you should follow the use by date.
I could have washed the food that went on the floor, but the floor wasn’t that clean.  I didn’t think it was a good idea.
I could have eaten the left over sandwiches, but actually that would have been a waste – I didn’t want them or need them.  I think eating food unnecessarily is just as much of a waste as not eating it!
2. Not bought so much milk or used it up before it’s use by date to make white sauces to freeze.

I have to admit that I regularly buy a get one, get another one much cheaper offer on milk.  It works out practically the same price as buying much less milk and sometimes I need it.  I also often have the same problem with satsumas. A lot of the time I don’t need all the milk/ satsumas that I bought and it does often go to waste. I need to start getting smarter with my milk / satsuma shopping!
3. Not allowed my younger son to snack so close to dinner time / been more on the ball and stopped him from chucking his dinner on the floor!

This is not a regular occurrence and it is often hard to judge appetites with young children, so I am cutting myself some slack on this.  I did manage to get breakfast right today by not giving him any cereal, just fruit and oatcakes, so at least I got something right!


What does it really mean to waste food?


I think the point I am making is that reducing food waste for me does not mean regularly trying to rescue food past it’s use by date, or eating leftovers just to stop them going in the bin. It is about buying the right amount in the first place, serving the right portion sizes, being aware of the food stored in the fridge/ freezer/ cupboard and using it up or even giving it away before it reaches it’s use by date.
What do you think and how are you getting on with Zero Waste Week?

This post has been shared at Green Living Thursdays.