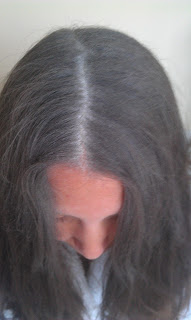 Cornflour in my hair!

Recently I found myself standing in my garden pouring cornflour all over my hair while my kids watched as they bounced up and down on their trampoline.  This might not have been the best idea, but there haven’t been any copy cat attempts just yet!

This blog post contains affiliate links which are marked * . It won’t it cost you anything extra to purchase through it, but it will help support the blog. Thanks!

I felt like a mad woman, who looked a little like a witch – maybe they used to pour cornflour on their hair too!

Can you use cornflour in hair as a dry shampoo?

I was pouring cornflour* all over my hair in an attempt to put an end to greasy hair.  I’ve lost count of how many weeks I haven’t used shampoo, but if anything my hair seems to be getting greasier.  I’m not ready to give up and will keep going, but not knowing how long it will take for my hair to sort itself out is hard!  It is difficult to resist the allure of a quick fix solution.

Anyway so the first time I used the cornflour it actually did the trick.  It was great and I felt for the first time in a long time that my hair was fairly normal.

So a week later (I wash my hair around once a week), I tried again.  I didn’t follow quite the same process as the first time as I just put it on and then rinsed it out soon after – it didn’t work!

The third time I made sure I followed the same process I had the first time round.   I left the cornflour on for hours, brushed my hair through before washing and afterwards I think it was greasier than it was before I washed it!

Putting cornflour in my hair was not a success for me.

I think cornflour works for some people, but not for me, so I’ve given up pouring cornflour all over my hair and have gone back to my original plan of just washing with water for the time being, while I plan my next attack on my greasy hair!

Have you got any tips for banishing greasy hair the natural way, does cornflour work for you?  I would love to hear from you in the comments below!